[back] Chaobology: Destiny's loot cave was gone too soon [permalink]

Chaobology is Ken's totally opinionated column on anything from the serious to the trivial.

The Loot Cave exploit became extremely popular on the net and it didn’t take long for most of the world to hop on the bandwagon. I mean, the cave spewed out an endless chain of trash mobs that net a good amount rares—some people enlarged their collection of exotics. I don’t condone the actions of those guilty-- it was technically an exploit after all. But see here, I say that with a grain of salt because Destiny’s loot system makes resorting to the loot cave an understandable notion.

At the moment, Destiny’s loot system is abysmal. Yes, loot is supposed to be hard to come by, especially in a game where loot is everything. But in most games, you can spend hours in a raid or farming session and surely, someone will come out with a piece of loot worth bragging about. Destiny’s loot system right now pretty much relies on faith and has very little to do with how many hours you put in PvE or how much you contribute to your team in PvP. Simply put, it’s random.

Normally, I’m not one to complain. I’m that guy who can reliable slave away for hundreds of hours to acquire the mystical staff of a thousand suns, and perhaps all its iterations. But when I have to pray to RNGesus for every step of the looting phase, that’s not good game design. Let me put it to you this way; in Destiny’s current raid, players can spend five or more hours completing it, only to net them an engram that, once obtained, CAN yield an item with low stats. That’s like spending 5-hours to find an Easter egg that can be filled cash, but can also contain bottlecaps or other things you’d trash.

I don't think it’s very difficult for Bungie to adjust the yield rates of exotic and legendary items, and I feel it’s reasonable to ask that legendary engrams yield legendary loot, at least most of the time. Bungie needs to understand that it’s ok to make things hard to get, that’s where the fun in games like Destiny come from but if the rumors are true—spending 16+ hours farming can yield nothing— then well, that sucks.

If the Loot Cave were to leave behind any sort of legacy, let it be that loot be reasonably acquired in the near future. 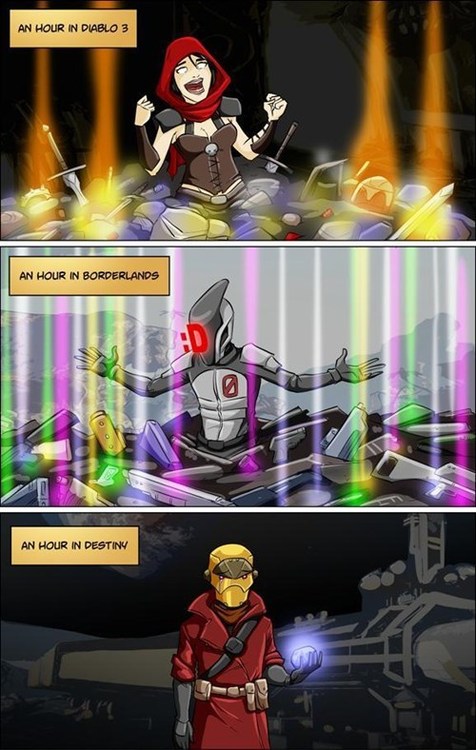 And a new Loot Cave has already been found. >_>

The entire story of Warcraft in 40-minutes
Next Post
Chaobology: World of Warcraft becoming eSports friendly